San Carlos Beach has got to be the most versatile dive site in the Monterey area. The dive site located just off the beach, also referred to as The Breakwater, is used for scuba class instructional dives, a great macro photography location, a go-to night dive destination, the location of the “barge” wreck, home to the Metridium Fields, and the location of an almost guaranteed California sea lion (Zalophus californianus) encounter. San Carlos Beach is not just a single dive site but many dive sites […]

A dear friend, a diver with seven decades of diving experience, once told me something that stuck with me. “I’ve never stopped learning,” he said. “I can always get some lesson, however small, out of every dive I do.” I surfaced from my dives with a slightly different attitude after that, always taking the time to concentrate on what I’d learned and what tiny bit would — or should — remain with me. He is right: there is always something you can absorb, no matter […]

The post Getting Schooled as a Scuba Diver: Finding the Lesson in Every Dive  appeared first on California Diving News.

Wiping the sleep from my eyes, I saw that our dive boat had reached the backside of Santa Rosa, the third in the Northern Channel Islands chain, while I’d been snoozing. I wasn’t sure where we were or where we were headed but I quietly wished it was the East End Pinnacles.  My wish came true. There are two groups of pinnacles just south of East Point. Three make up the outer group with depths of about 50 feet to the top and 85-100 feet […]

The latest news on the travels of Indonesia’s tagged whale sharks.

Conservation News spoke with one of the authors of a new study on walking sharks to find out how he and his team uncovered the evolutionary origin of these peculiar creatures — and how this information could help us adapt to climate change.

In Indonesia’s marine protected areas, we are seeing a reduction in the exploitation of turtles.

The more we learn about mantas, the better we can protect them — and the people they benefit.

Overfishing continues to push global fish populations to the brink of collapse. Smartphone apps can help change that.

The sanctuary will protect an area crucial for biodiversity — and Ecuador’s economy.

How working with octopus fishers in Madagascar led Kame Westerman to make a surprising discovery about women and conservation.

Knowing where the turtles go is the first step to protecting them.

Ocean scientist Greg Stone takes us 18,000 feet under the sea. 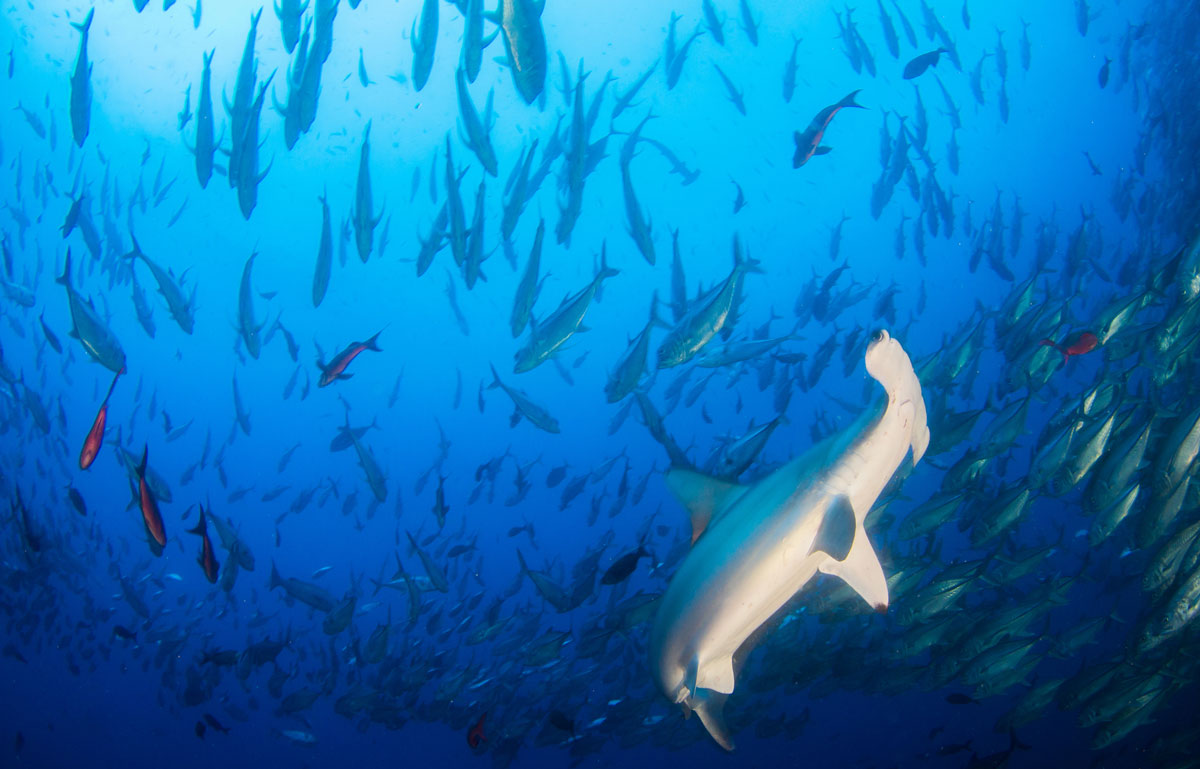 The Isla Del Coco National Park (PNIC), received the “Blue Park” award for being a Global Ocean Refuge in the “Gold” category of the…

Both hulls of the Hokule‘a pointed with pride out to sea from Pago Pago Harbor. Leaving port, the sun was high above us, the waves broke with white peaks of foam, and the worn edges of the dark green island of American Samoa bade us farewell.

Crew aboard the Hokule‘a upon arrival in Apia, Samoa. (© Conservation International/photo by Greg Stone)

The open ocean was ahead of us, and beyond that our destination: Apia, Samoa. It’s only the next island over, but in the Pacific the “next island over” can be about 100 miles [161 kilometers] away.

It is fitting that I traveled on board this ship, of a style and tradition that Pacific cultures used for centuries to convey themselves from island to island, to a meeting where the future and survival of island cultures around the world would take center stage. The sail brought us to Apia to attend the third International Conference on Small Island Developing States (SIDS). It is a gathering that only happens every 10 years, and it brings together the heavy hitters and decision-makers for ocean and island conservation.

Read moreAboard the Hokule‘a: Sailboats, Small Islands and the Stewardship of Nature

For More go to: Oceans

Dr. Mark Erdmann has described 100 fish species that are new to science. Here are his favorites.

Mark Erdmann and Gerry Allen were part of a team that completed a rapid survey of Fiji’s Lau Seascape. They discovered nine species that might be new to science.

Let’s face it: Most people aren’t reading Dostoyevsky at the beach.

Amid the bright sunshine and lapping waves, it’s easier to page through a grocery-store romance novel than focus on a dense book that is unconnected to your surroundings. But here’s a thought: Let the sea inspire you to learn more about it.

With that in mind, here are seven marine-themed page-turners recommended by Conservation International staff who work on ocean issues around the globe.

For More go to: Oceans